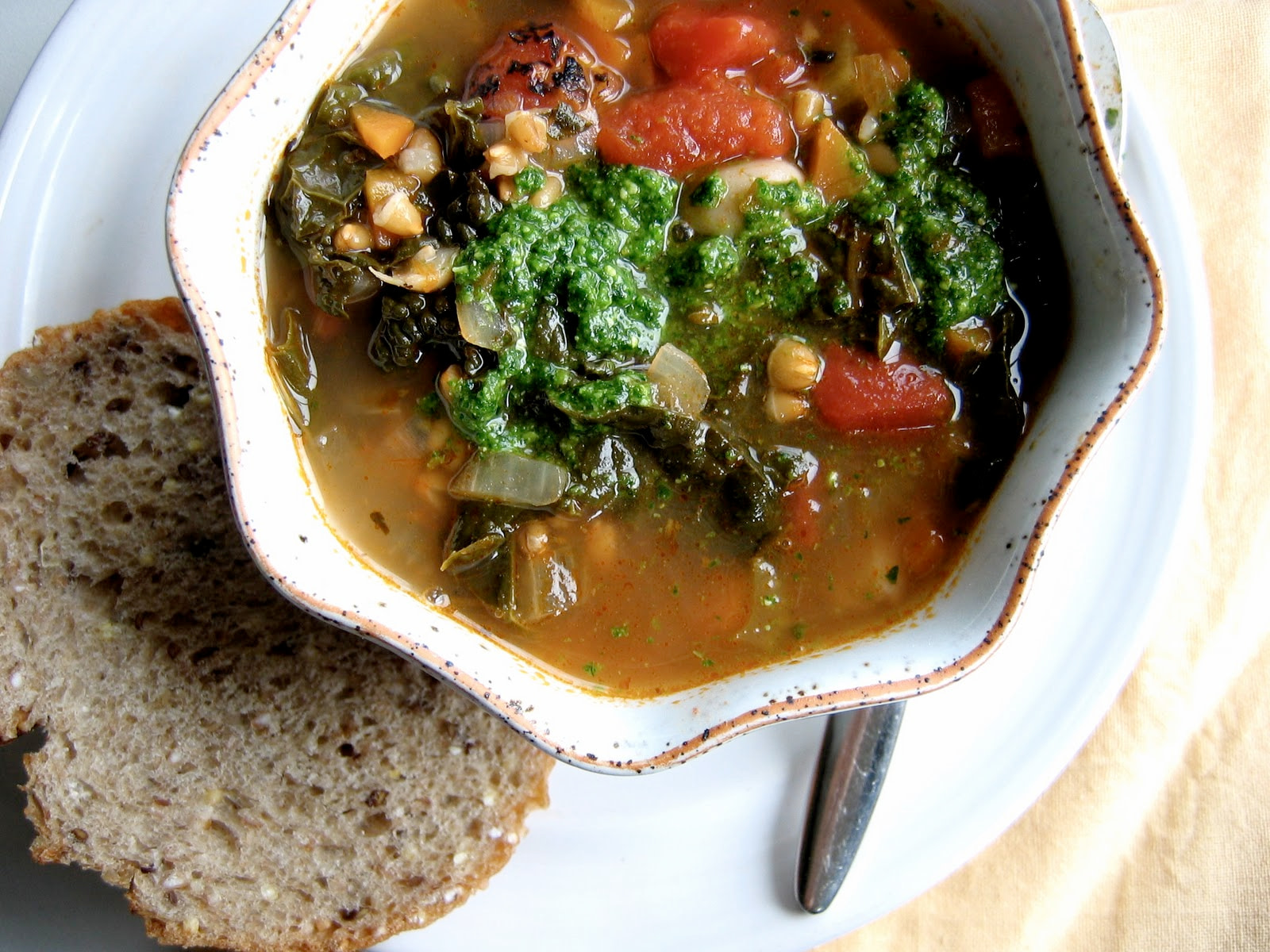 Reading in the Metro this morning I saw that this is supposed to be the coldest winter in Britain in over 80 years. They say to expect over 36 days of snow and ice and record setting low temperatures. My response? Yes! I get to make loads of soup! Guess I better buy a new freezer to put all these leftovers in.

Typically this time of year you can find potato and leek soups, tomato basil soups and broccoli and cheese soups as common menu items in local restaurants. I wanted to showcase different soups that you may not have thought of to bring a bit of a different taste to your palette and a refreshing change to your soup routine.

This soup doesn’t just look delicious; the smell and taste are exquisite. This morning I awoke to the rain absolutely hammering it down, the wind was whipping up a gale and all I could think is “I’m going to freeze today”. Straight into the crock pot when this beautiful soup from Food and Travel. It isn’t meant to be made in a slow cooker, but I have a full time job, go to school and hot yoga, I don’t have time everyday to commit to making a full on meal. So this baby went in my trusty slow cooker. I’m cooking it low and slow, but following the normal recipe the chorizo comes out a bit more crisp than it would in a slow cooker. Either way you get the lovely creaminess of the potato, smokey spiciness of the chorizo and the lush hint of white wine. It is beautiful and perfect for a winter date night in.

So many people are put off by the parsnip. It isn’t a traditionally delicious root vegetable when served on it’s own, though I do love them roasted or prepared like chips. In this soup by Petit World Citizen the parsnip is joined by Jerusalem artichokes (Sunchokes), pear, walnut and coconut milk. It is a beautiful curried soup that has complex flavours that even the most picky palette will love. When it comes to preparation don’t be confused and think that jerusalem artichokes can be substituted for regular artichokes, they aren’t even related. If you can’t find this elusive root vegetable you are better of substituting with something like a potato since the consistency is relatively close, though the taste is different. I added a fresh slice of garlic ciabatta bread for dipping, because what soup doesn’t deserve a good dipping bread?

Split pea soup doesn’t tend to be a favourite in many households. Mine isn’t included among those. Probably because split pea and ham is one of my favourite soups of all time. This one just might knock that off the top spot though because what do I love more than pea soup, mushrooms, put them together and it’s heaven in a bowl. Food and Wine deliver this beaut of a recipe that takes just under an hour to prepare. Finished with the sauteed mushrooms and fresh parmesan and you have a decadent soup that you’ll want to eat day after day.

My only suggestion that might make this a bit better, and it may just be my love of bread, but it would be to serve it in a rustic bread bowl. The flavours of the split peas soaking into the bread to be eaten after is absolutely delicious and would make more filling for someone who prefers meat in their soup.

I come from the southern states in the US, where there is an abundance of Mexican restaurants. No, I’m not talking about Taco Bell but the real deal, family run restaurants with amazing soups and stews like this one. Making this stew reminds me of home and when I smell all the delicious aroma when I walk in the door from work it makes me feel all warm inside even though I haven’t even touched a bite. Sweet Peas and Saffron have hit the nail on the head with this fabulous recipe. It has all the essences of Mexican food in a simple recipe that makes your life simpler by being made in your slow cooker.

If you were in the US, I would definitely follow the recipe to a T. But being in the UK, it’s been very difficult for me to find a “salsa” that actually tastes like salsa should. So a substitution is called for. Now either you can grab a can of chopped tomatoes with chillies and throw them in. If you have a small food processor or are good with a knife I’d suggest my pico de gallo recipe to throw in there.

Chop, dice and mince everything and combine into a bowl. If you want something that is less chunky put everything into a blender and voila you have a salsa without chunks.

Now that you have your own pico de gallo come salsa you can add that to your slow cooker with your chicken, black beans and other ingredients. When you walk in the door, tea will be ready, the kids will be fed and cleanup is a cinch. Enjoy.

If any of you have ever visited the United States and eaten at a restaurant called Olive Garden, this soup will seem quite familiar. The recipe from Gimme Some Oven creates a soup that is nearly identical in taste which is, let me tell you, amazing. This soup is incredibly easy to make with only seven ingredients, most of which you can find in your local supermarket. The only ingredient I had a difficult time finding was the spicy Italian sausage, but I did find some good alternatives. Heck sausage has an Italian chicken sausage and Asda has an Italian inspired pork sausage. These may be hard to come by so it may be worth using pork sausage and adding spices to make up for the lack of Italian sausage. Either way the soup will be gorgeous! The sausage is definitely the main ingredient in this dish, though I happen to love the gnocchi. It’s a heavy soup so I would suggest having it as a tea rather than a lunch.

Have a favourite winter time meal? A go to meal plan for when the snow is piling up? Share it with us via email or tag us on Twitter @appliancecity.