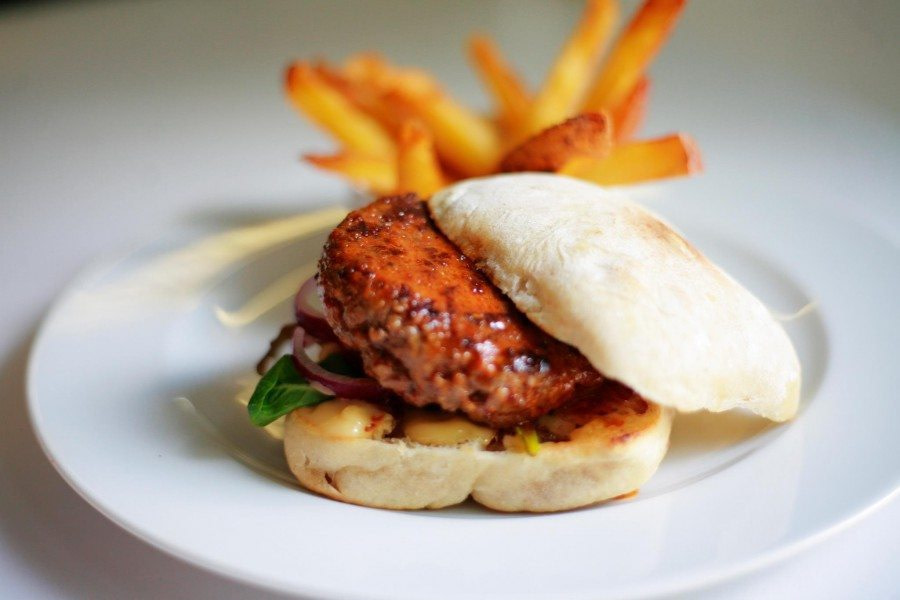 Who doesn’t like a delicious, juicy burger? In honor of National Burger Day, August 27th we’re asking ourselves…..if this burger were a range cooker, what range cooker would it be? Whether you love your beef, savour the veggie or are keen on seafood there’s a burger in this list for you.

A twist on the ordinary, this gourmet burger brings together juicy beef cooked to perfection and tantalising homemade salsa. We found this fantastic gourmet burger concoction on Food Network UK. Grilled to perfection, this beef patty has a kick with added Tabasco sauce mixed into the mince. Served on a toasted Ciabatta Roll it looks as good as it tastes.

The question remains, what range cooker would this burger be? We’ve chosen the Belling Classic 90DFTCBHJA Dual Fuel Range Cooker. This Belling Classic is part of our Colour Boutique Range. Arriving in ‘Jalapeno Red’ it’s as spicy as its burger, plus with a built in gas grill you can still enjoy your barbecue despite the grey weather outside.

National Burger Day is for everyone, that includes vegetarians. Our favourite vegetarian burger is this Quinoa Burger from Taste.com.au. Baby beet root, apple and feta come together to make this a delicious culinary masterpiece. We knew when choosing this burgers matching range cooker it had to be something stunning with clean lines. We’ve chosen the Falcon F1000DXDFSS/CM. Arriving in breathtaking stainless steel with a heavy duty roll out grill and five zone gas hob, making this beast of a veggie burger has never been easier.

Stop whatever you’re doing and head to the supermarket. Breakfast for National Barbeque Day is sorted with this delectable smoked salmon burger on a toasted English muffin from Weber. It’s never too early for culinary perfection and this burger fits the bill. The range cooker to match had to be something that upon sight would conjure images of mouthwatering delicacies. The Stoves Sterling R1000GTSTA brings the ordinary to extraordinary. Clean lines and modernity come together with loads of extras like a built in wok burner and slow cook oven. This burger and range cooker are a match made in food heaven.

You may need to grab a napkin. This burger from Chef Mike Ward is drool inspiring with sun-dried tomatoes mixed into the mince, soy caramalised onions and triple Brie. The range cooker to match this had to be something with that little “extra” something. It had to be compelling, something that would inspire culinary genius. It had to be the Rangemaster ELS100EICR Induction Range Cooker. Finished in a beautiful cream, with flourishes of French design and an impressive five zone induction hob if this range cooker doesn’t inspire you to create culinary magic nothing will.

For this next burger / range cooker pairing we needed to find the perfect burger to fit the gorgeous Italian Bertazzoni HER100-6-MFE-D-VIT Dual Fuel Range Cooker. It needed to be something that was timeless and exquisite. After long deliberation (and many growling stomachs) we settled on the delectable Very Italian Gourmet Hamburger from Gourmet Project.  Aged Parmesan, red wine and brown sugar come together to create a burger fit for Michael Angelo, Leonardo Da Vinci and well, everyone with a mouth! It’s paired Bertazzoni range cooker is no less impressive with a six burner gas hob and two electric ovens; you’ll be whipping up this meal in no time.

The Butcher’s Burger from Bon Appetit is a classic cheese burger, with a twist. Created from three different cuts of beef, it’s not your ordinary cheese burger.  We needed a range cooker that looked retro with professional performance. We settled on the gorgeous Smeg TR4110AZ ‘Victoria’ Traditional Dual Fuel Range Cooker in powder blue.  The Smeg Victoria Range cooker might look straight out of the 50’s but it’s built with a seven burner gas hob, two electric ovens and a separate grill, perfect for creating your own Butcher’s Burger. Enjoy.

The homemade beef burger with Stilton Rarebit is a classic british recipe from Great British Chefs. It’s range cooker match needed to be something classically British. Made in Britain the Britannia line of range cookers is perfect to pair with this burger. The Britannia RC-9TG-WY-K Wyre Dual Fuel Twin Oven Range Cooker brings together a vintage matte finish, dual electric ovens and an impressive six burger gas hob. Perfect for burgers, baking or bread this range cooker is a real winner.

If a burger could be described as elegant than this surf and turf burger with chive buerre blanc from Perpetually Hungry can be described as such. Named “The Adam” it was inspired by an Australian golfer, Adam Scott who served surf and turf at a dinner. The burger brings together savoury beef and succulent lobster. The range cooker that we paired with this had to be something to behold, a masterpiece unto itself, the upper crust of range cookers. We went with the Mercury MCY1082DFSS Dual Fuel Range Cooker. Words cannot do this range cooker justice. It arrives with a state of the art design, fitting into kitchens from modern to artistic. You can rest assured that its five burner gas hob and dual electric ovens will deliver nothing but professional quality. For those who like delicacies this burger and it’s range cooker can’t be beat.

Love a range cooker? Need one of your own? We have manufacturer trained experts available to guide you through the process of achieving a kitchen worthy of masterclass chefs. Give us a call on 0115 965 1937.