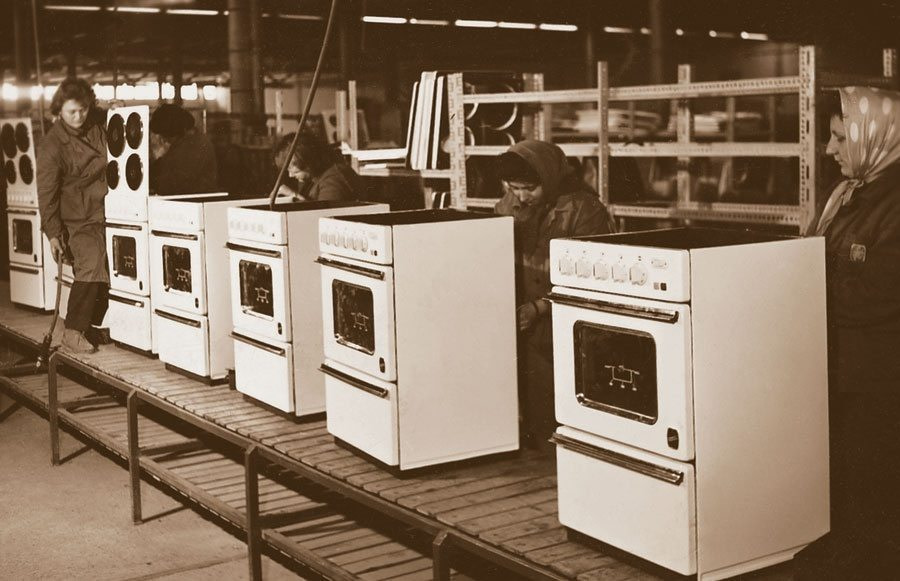 We answer all your questions about our manufacturer Gorenje – Who are they? Where did they come from? What do they have to offer?

Gorenje has been in the white goods sector for quite some time. The company was founded in 1950 in Gorenje, Slovakia. When it first opened it was building and manufacturing agricultural machinery, a far cry from the white goods it produces today.

A short eight years later, Gorenje made the jump from agricultural manufacturing to white goods with the production of its first solid fuel cooker.

Doesn’t look like much, but during the 1950’s it made making dinner much more efficient and accessible in the family home. From their humble beginnings of their first solid fuel cooker, a short eight years later Gorenje launched their first electric cooker.

By 1960, Gorenje was growing in leaps and bounds and ready to spread its wings. During that year, they moved to their new and current location in Velenje, Slovenia.

The 1960s were a time for massive expansion for Gorenje.

The 1960s didn’t only see the launch of their first line of washing machines, but also their line of refrigeration, which is still popular today. 1961 saw Gorenje’s first white goods crossing borders with its first export to Germany. In 1971 Gorenje went even further and began producing everything from televisions to medical equipment.

The 1970s saw Gorenje’s influence stretch throughout western Europe to countries like Italy, Austria and France. It was also a huge period of design advances. Gorenje brought in a new German designer, Ciril Cesar, to further their brand presence, brand outlook and a new feel to their products. Ciril Cesar was brought in as their head of the new Gorenje Design Centre. Through the 1970s and 80s Gorenje’s look and feel would change dramatically, thanks to this new Design Centre.

From the 1990’s to the mid 2000’s Gorenje’s products started focusing more on the customer interaction, environmentally friendly and cutting edge technologies. Gorenje focused more on the user experience giving homeowners the technology they wanted with a price point they could agree with.  The new strategy in the early 2000s was to offer Everything for the Home, not just one or two of the white goods.

Gorenje Retro does just what it says on the tin. Modern levels of energy efficiency and top of the line features in a retro style case. Classic lines of the 1950’s style fridge freezers that fit perfectly into modern homes. If you want a piece of art that doubles as your fridge freezer and is also affordable. This line is worth a second look, or a third.

If you’ve never heard of Gorenje, now’s the time to get yourself educated about this sophisticated brand that is making headway through a market with big names.

Check out our full Gorenje range from Retro to the Designer collection. There’s something for everyone from Gorenje.