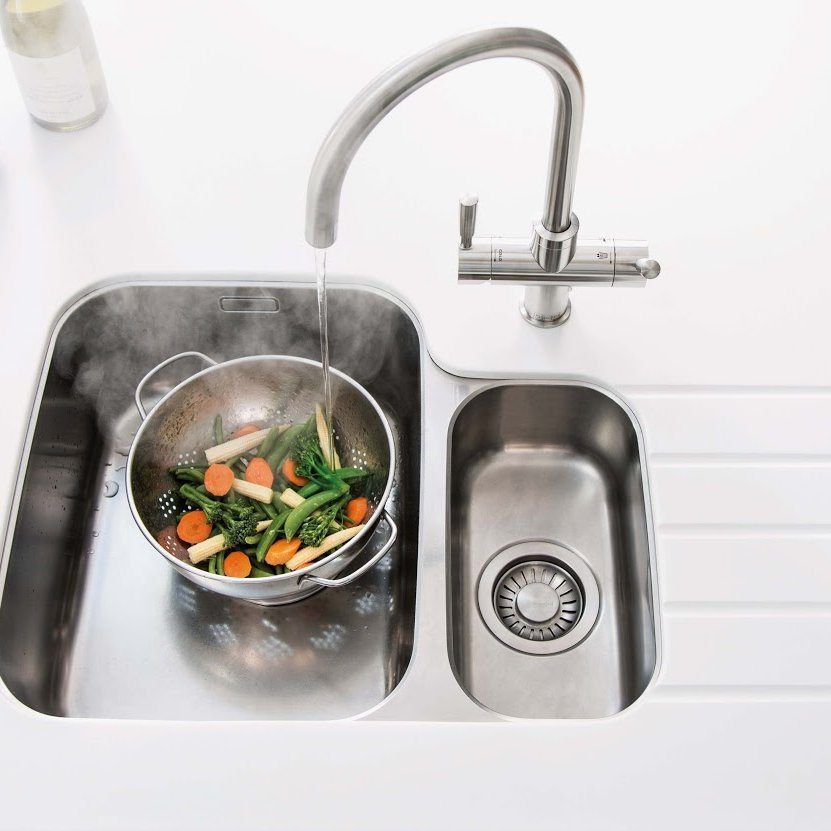 First and foremost, how does a boiling tap work?

A boiling tap is a water tank that’s connected to your water supply and heated via a power socket. The hot water is stored in the tank until needed. By a simple flick of the tap, the hot water from the tank is pushed through a tube until it pours out of the mouth of the tap.

There are many benefits of having a hot water tap installed in your home. However, it’s only cost-effective and energy-efficient with frequent use. If you want to find out more about pros and cons to boiling water taps, and how they compare to the everyday kettle, please have a read through our article Instant Hot Water Taps v. Kettles.

This largely depends on how often you like to have a brew. If you’re someone who is partial to a cuppa, or you live in a household where many people are boiling the kettle at different times, a boiling water tap will be incredibly energy-efficient in comparison.

If you look after your hot water tap by switching it off overnight, you’ll find that you’ll save even more pennies when compared to a kettle.

We tend to overfill our kettles when we want a cup of tea or coffee. In the early morning, we’re on auto-pilot and just fill our kettles a substantial amount. By overfilling, you’re wasting more energy. The kettle requires more energy to heat up more water. Often, that leftover water either gets chucked down the sink or it gets reheated when it comes to having another brew. This isn’t energy-efficient at all.

Hot water taps are heavily insulated and can produce up to 25 cups per hour. This means that you’ll only use the hot water that you need for every cup. The only argument on the energy-efficiency of boiling taps is that they’ll require a small amount of constant energy to maintain its temperature.

Hot water taps are cost-effective; however, you won’t see the true benefits of its effectiveness until you’ve had it installed and used for quite a few years.

The cost of the appliance itself, and the cost of the installation, outweighs the money that you’d save on your energy bills massively. If you’re planning on keeping the appliance for years to come, they’re a great investment. Boiling water taps are mainly installed and used for style and convenience.

Is Boiling Tap Water Good for You?

Boiling tap water is good for you as it kills any bacteria that may be lurking within it. Some argue that it’s unnecessary as we live in a country where our water is clean and safe to consume. While we agree with this argument, we believe that you can never be too sure. Especially as microorganisms will survive in water unless it’s boiled. And, with the amount of water that’s used country-wide daily, how clean actually is it?

Does Boiling Tap Water Get Rid of Fluoride?

In short, fluoride can be removed from water, however, it is incredibly difficult. This is because fluoride isn’t a complete compound. If you boil water to get rid of fluoride, all you’re doing is making the fluoride more concentrated. This results in a fluorine salt that sits in the water.

Here’s where it gets tricky; you can boil out fluoride from your water however, you have to capture the evaporated water and then distill it. In other words, to remove fluoride, you must boil a pan of water, allow the water to evaporate, capture that evaporated water (steam), and then chill that steam until it becomes a liquid.

In the unfortunate case that your tap water has chlorine in it, you can remove this chlorine by boiling a pan of water for 15-minutes.

Boiling tap water does not make it distilled. To distill your water, you must boil your water in a pan. Capture the water vapour, or steam, and then chill the vapour until it becomes a liquid again. Simply boiling your water will only remove some bacteria, it won’t distill it.

Will Boiling Tap Water Purify It?

If you haven’t got access to clean and treated water, boiling tap water in a pan will purify it and make it safe to drink. You must ensure that the water has reached boiling point though, this is around 212-degrees Fahrenheit.

A hot water tap has many benefits; it’s cost-effective over time, energy-efficient when compared to kettles, and removes harmful bacteria from your water.

Installing a boiling water tap not only makes your kitchen look great and reduces the time it takes to make a cup of tea or coffee, but it also makes your water safe to drink at all times. If you like to boil your water and then cool it down to purify it, installing a hot water tap will definitely improve the process, all while saving your time, and saving you money with your energy bills.