You only get a few shots at buying a kitchen tap in your lifetime. They last for many years, and there’s a chance you may end up using your kitchen tap for many decades.

It’s unlikely that you’re keeping up with the world of kitchen taps too. There’s not much room for innovation in the kitchen tap department, but instead a focus on design and aesthetics.

So, we’re going to go over how to choose the right kitchen tap for your home. It’s all in the details for this one, and we hope our guide will help you to find a tap that’s perfect for your kitchen.

These are the different types of kitchen tap that you need to be aware of:

There’s pros and cons to each type, but mostly you’ll know quite instinctively which one is the best for you.

A favourite in contemporary kitchens, a monobloc tap generally has one spout and one lever. You can control the flow and temperature with a single lever handle.

The monobloc tap is a modern option and very easy to use. The range of temperatures can be helpful when you’re washing up.

A pair of taps, one for hot water and one for cold. You’re more likely to see these taps in bathrooms than kitchens these days. They do remain a traditional option though, and are suited to kitchens that are aspiring towards a retro or rustic look.

Pillar taps are generally more affordable and easy to install, but having hot and cold water from separate taps can be a bit of a nuisance in the kitchen. Pillar taps are more of a style option than a functional one.

A mixture of the previous two. Often with one spout and two levers, deck mixer taps come in a fantastic array of styles. This kind of design means that it can nail both contemporary and traditional styles with ease. 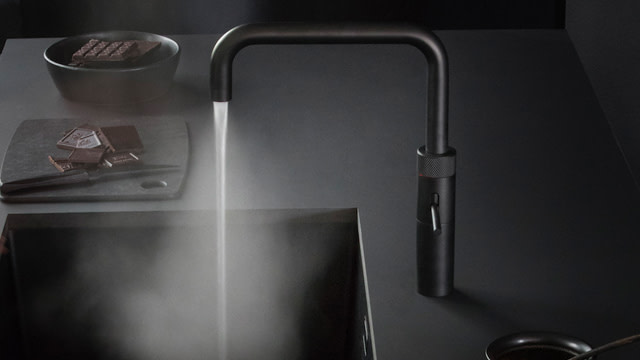 What are the Best Kitchen Tap Features?

The tap is a hard appliance to try and reinvent and revolutionise. They’re a pretty standard bit of kit, you know where you stand with them, and there’s not much you need from it that they can’t already handle. But that doesn’t mean that people aren’t thinking up new features for kitchen taps that you didn’t even know you needed.

We’re going to cover the main features that are worth considering.

These are fast becoming a favourite in the kitchen, especially for those that still wash up by hand regularly. The pull down spray tap allows you to get tactile with the water. You can grab the faucet and target problem areas. Gives you a more powerful and thorough clean.

It also helps with other things like filling up a bucket or large receptacle, makes washing fruit and veg really easy and you can still use the spray tap whilst holding whatever it is you’re cleaning.

Perhaps the best tap innovation to ever happen, especially in a nation of enthusiastic tea drinkers! It should come to no surprise to anyone that instant boiling water has been a massive hit in the UK.

Does as it says on the tin, there are lots of kitchen taps on the market now that give you instant boiling water. The benefits of this speak for themselves. Do you use boiling water? Are you bored of waiting for the kettle to boil? Well here’s your answer.

Not exactly a new feature, taps have long been able to offer an option of filtered or unfiltered water. New taps are coming with 3-in-1 or even 4-in-1 functions however, offering both filtered and unfiltered cold, hot and boiling water. If you’re fed up of filling up your water jug, or are concerned about the quality of your water, these will put your worries at ease.

As mentioned earlier, there are plenty of kitchen taps that offer these modern features and performance but are packaged in a traditional design. These are perfect for those that are going for a farmhouse kitchen look.

For contemporary kitchens, most new kitchen taps are very sleek and stylish. For a real statement, check out our black kitchen taps. These are a bold and stylish option that are increasingly becoming a lot more common in modern kitchens.

Shop our full range of Kitchen Taps, with a range of complementary Sinks for you to check out too. If you’re in need of some other vital kitchen appliances, head to our Cooking, Refrigeration and Extraction sections for kitchen classics like our American-Style fridge freezers, range cookers, hobs and more.