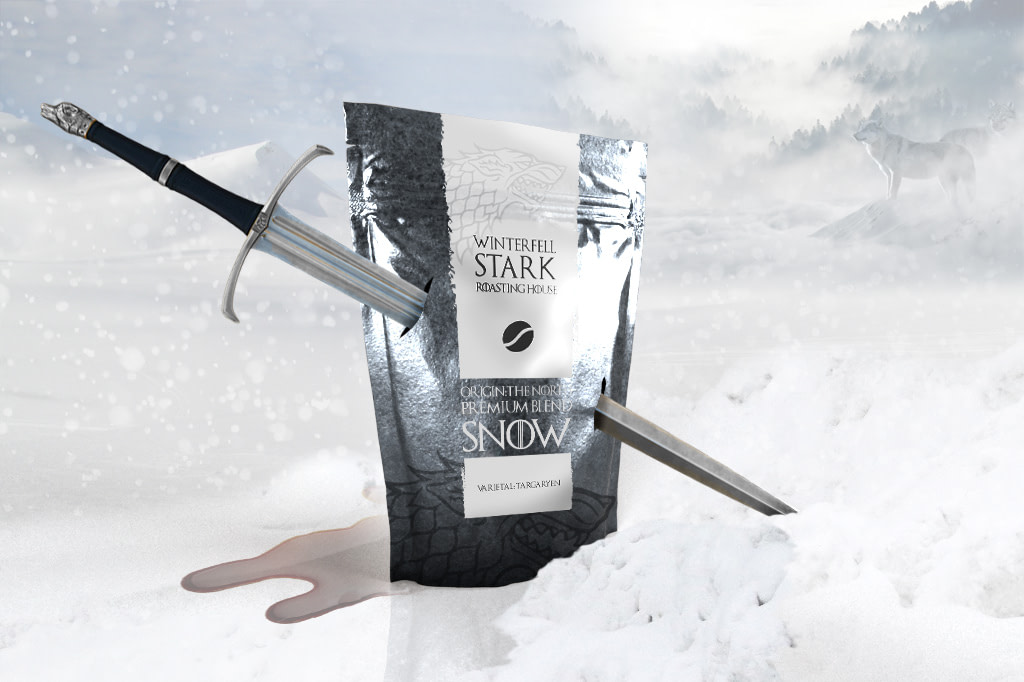 Coffee has been a mainstay in television and film for decades. Who doesn’t know about Central Perk, the fictional coffee shop from Friends? Is a rom-com a rom-com if someone doesn’t pensively sip from a coffee at least once? Is a political drama complete without gratuitous coffee drinking?

What happens when we combine the brew that we all know and love, and mix it with some cult classics from film & TV? We’ve developed some concepts to put out into the internet ether. Hopefully, we’ll see them on shelves one day!

Eagle-eyed Game of Thrones fans noticed something quite out of the ordinary in Westeros recently. It turns out that Khaleesi aka *inhale* Queen Daenerys Stormborn of the House Targaryen, the First of Her Name, Queen of the Andals, the Rhoynar and the First Men, Lady of the Seven Kingdoms and Protector of the Realm, Lady of Dragonstone, Queen of Meereen, Khaleesi of the Great Grass Sea, the Unburnt, Breaker of Chains and Mother of Dragons, loves…Starbucks.

After celebrating something that we will not describe to avoid spoilers, fans noticed a Starbucks cup in front of her. But that was not Starbucks, it was Starkbucks. And she was enjoying the Starks’ signature brew: Premium North Blend.

How did Beatrix Kiddo stay alert, awake and motivated when she was buried alive? Was it her gruelling training? Her sheer force of will? Survival instincts taking over? Sure, all of these had a part to play, but just out of shot, what you don’t see is her enjoying a double shot of Black Mamba coffee.

This stuff should come with a health warning as one sip is enough to send you into overdrive. Normally, breaking a block of wood with a one-inch punch is impossible, but when you have some Black Mamba, anything and everything becomes possible.

If bliss was a hot beverage, then you’re looking at it right now. This light, floral coffee is essential before any tranquil countryside walks. Made by the folks over at Studio Ghibli, seminal filmmaking isn’t the only thing they’re famous for. Studio Ghibli are hailed the world over for prioritising originality, artistic virtue and quality over commercial stats. Studio Ghibli couldn’t care less if only one person was to buy a film they made, as long as it stayed true to their vision.

Life is full of bumps in the road, rainy days and at times, you can feel like you’re tumbling down a hole. But Totoro is there to lift you up, lighten your mood and it’s these moments we should savour and enjoy.

With shamanic roots spanning back thousands of years, the Black Lodge Roasting House isn’t an orthodox roaster by any means. A peep behind the curtain will reveal how they make their signature blend: Damn Fine Coffee.

Black Lodge Roasting House’s blends are championed by secret societies over the world and drinking it is a journey into yourself and your soul. In fact, Damn Fine Coffee is the only thing we have time for!

We’ve been to the future and we’d like to talk about this coffee from the 29th Century. This Limited Edition blend is what will turn one noble robot into a coffee magnate in several centuries’ time. As you may have noticed, our planet is turning into one giant landfill site and in the future, humans will abandon this planet instead of saving it.

The Kof-E Directive Blend is what will spark the re-exodus. Wall-E, the last robot left on Earth, will discover a precious sign of life. A single coffee plant breaking through the endless waste. The beans from this plant will be harvested and roasted to create this Limited Edition blend. And this is what will make humans return to the mess they left behind.

If these coffees ever make it to the shelves, you’ll want a top-quality coffee machine to make your brews at home with ease. Head to the Small Appliances section to find them, alongside our blenders, juicers, kettles, toasters and more! Save money when you buy online today at Appliance City!