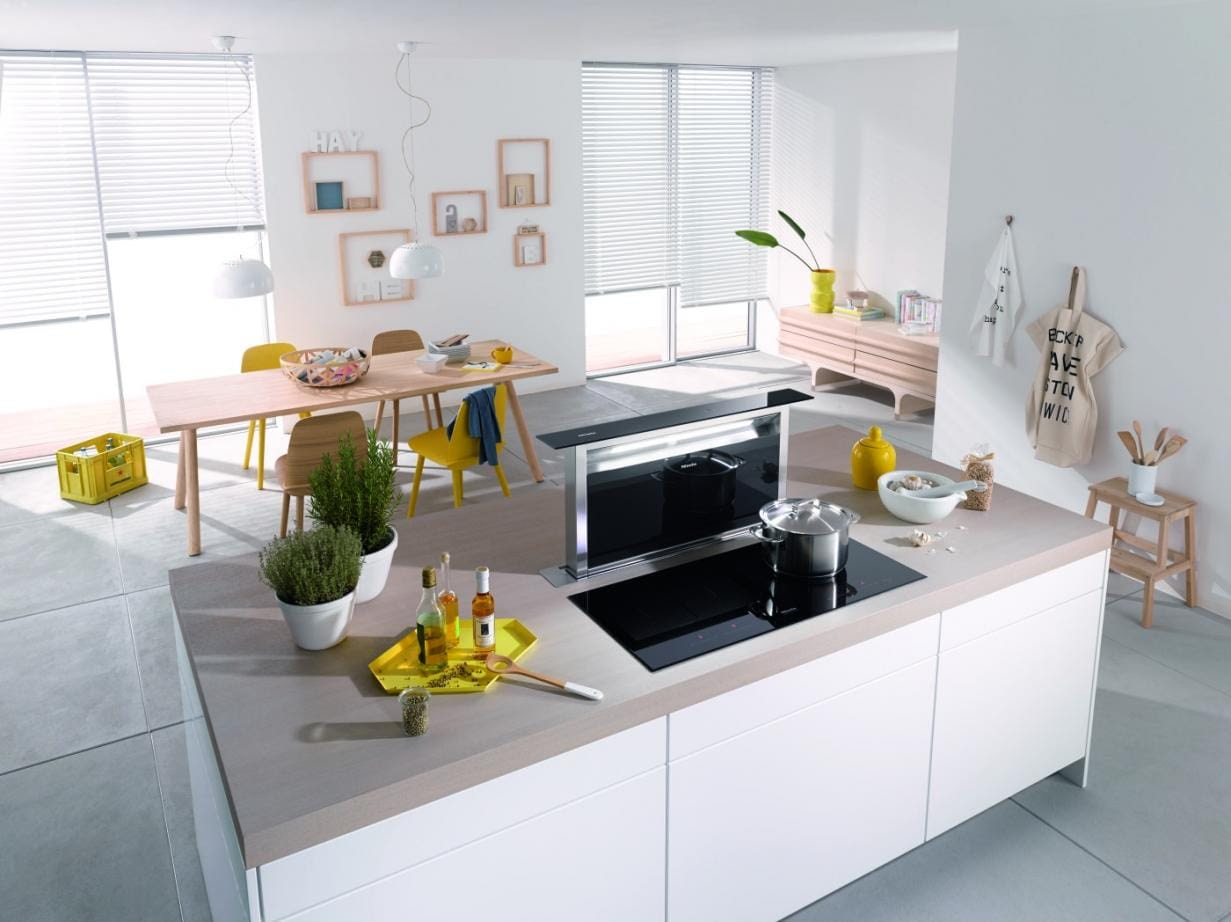 Downdraft Hoods represent a novel way to extract bad odours, vapours and anything else from your kitchen. A cooker hood is an essential in any kitchen, but as design moves forward with the times, we see household classics reinvented in innovative and exciting ways. They say you shouldn’t reinvent the wheel, but we beg to differ when it comes to our high-quality contemporary appliances.

If you’re thinking of getting a downdraft hood, but can’t decide whether it would be any more beneficial than a more traditional overhead extractor fan, we’re going to pit them against each other here.

We’ll go over their respective positives and negatives in comparison to each other A downdraft hood will offer you some perks that overhead cooker hoods can’t and vice versa. Get to know here, so you can make the best purchasing decision for your home!

Downdraft vs Overhead Design: Which is better?

There are some pretty key differences in designs. Overhead cooker hoods are a broad church of extractor fans that include canopy hoods, ceiling hoods, chimney hoods and more. So there is variance in overhead cooker hoods, but a downdraft hood is a type of design in and of itself that offers some unique benefits.

One of the biggest draws of a downdraft hood is its clever design. Built to be flush with your countertop, when in use it only rises to between 20 and 25 centimetres above the surface. When not in use, it is practically invisible. This is particularly advantageous to kitchens with high ceilings or cathedral ceilings. It’s also preferred in an open plan kitchen/living rooms as it doesn’t restrict any views around the room.

Overhead cooker hoods can be designed so that they are practically invisible, depending on where you install them. Ceiling hoods are flush with the ceiling, and so aren’t that noticeable. This does require you to have a flat ceiling which most do, but isn’t guaranteed. If you want a more rustic and traditional  look in your kitchen then a chimney hood is great for that also. It really gives the room a farmhouse feel which might be exactly what you’re going for.

There’s no clear winner here, and the only thing a downdraft hood can do that overhead cookers can’t in terms of design is to provide a solution for those who have cathedral ceilings in their kitchen etc. Other than that, it’s a question of personal preference. Downdraft hoods look very contemporary, but is that even what you want? You decide.

Downdraft vs Overhead Performance: Which is better?

Technically speaking, there is a compromise in performance between the two, but it is quite marginal. As steam and vapour rises, it is naturally easier to extract from above as that’s using the natural motion of steam to its advantage. Downdraft hoods need to work harder to make steam go in the other direction, so extraction rates do tend to be a bit lower. They tend to have 80-90% of the same extraction power, but do check to see.

This is barely noticeable in a normal kitchen, but if you’re quite a serious chef who does a lot of cooking then you might prefer the overhead hood. As downdraft hoods only rise 20-25cm above the counter then a downdraft hood might struggle with any pots taller than that so bear that in mind.

Downdraft vs Overhead Price: Which is better?

Because overhead cooker hoods encapsulates of many ranges there is a really very wide price range there. And a more expensive hood doesn’t necessarily mean a better-performing one. But as overhead cookers are fairly sizeable and are going to be quite noticeable you may want to fork out a bit more on one that looks nice.

Downdraft hoods are actually not as expensive as you may think. They look very modern and new and you’d be forgiven for assuming they’re all out your price range. But they can be yours for pretty much the same price as good-standard chimney hood.

Downdraft vs Overhead Installation: Which is better?

Downdraft hoods probably just about edge this one. Ducting through the floor is easier, there’s more access. Again, this is a marginal edge as overhead cooker hoods are very much the norm so construction firms have more than enough experience in installing them. They may, however, charge a higher price for the extra effort it requires.

Hopefully this has helped you to decide between the two. If you would like a downdraft hood, shop the range in our Extraction section. With a whole host of other cooker hood types, be sure to compare them to our other ranges and get the best one for your kitchen.

We have selection of range cookers and hobs in our Cooking section to match your new cooker hood. With bundle deals, special offers and seasonal discounts, see if you can’t snag yourself a deal!