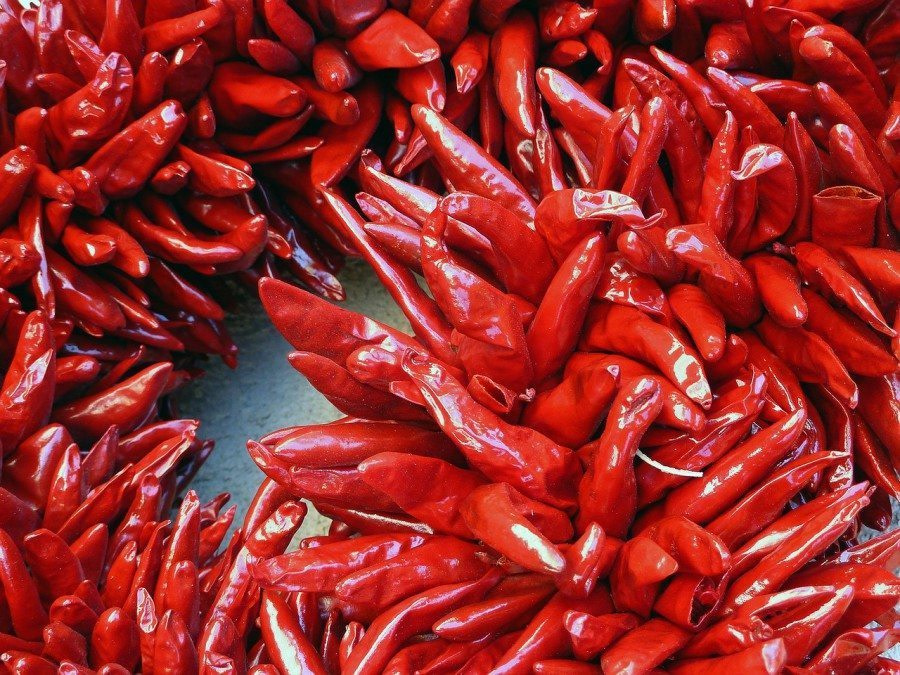 Chilli peppers are enjoyed worldwide to add spice and flavour to your food. There are many different varieties that vary in spiciness and taste. As a general guide, the smaller the pepper, the spicier it will be. The world’s most fiery chilli peppers are all less than 3 inches long. It is the capsaicin in the chilli that causes the heat or burning effect felt when it is eaten. The apex or the tip will contain the least capsaicin so if you’re ever taking on the challenge of biting a really hot chilli we’d recommend you take a bite from here to limit the burn!

The spicy heat or pungency of each chilli is measured using the Scoville Scale, created by an American pharmacist called Wilbur Scoville. Jalapenos, which many of us will be familiar with, are typically between 2,500 SHU (Scoville Heat Units) and 10,000 SHU. The Scotch Bonnet chilli which is generally considered quite spicy typically comes in at between 100,000 SHU and 350,000 SHU. If you’ve tried one of these you’ll have a reference point to help you imagine the heat of some of the world’s fiercest chilis…

The Top 5 Hottest Peppers in the World

Scoville Units: 2,200,000
This exceptionally hot chilli has held the Guinness World Record for the hottest chilli since 2013. It is a hybrid species, crossbred between a ghost pepper and a red habanero by a South Carolina Farmer.

Scoville Units: 2,009,231
This sweet but strikingly hot chilli is native to Morgua, Trinidad & Tobago. The first bite is said to be bearable until the heat begins to build and leave a nasty sting!

Scoville Units: 190,000,000
This chilli was developed by selective breeding originating from 7 Pot seeds obtained from Trinidad. The name ‘brain strain’ was down to their lumpy texture and somewhat brain-like appearance!

Scoville Units: 1,900,000
This hybrid crossed seeds from the Naga Morich with some Trinidad 7 Pot seeds for a fruity and floral flavour with plenty of heat.

Scoville Units: 1,853,936
This super-hot chilli is also known as the Douglah. It is the rarest of 7 Pot chillies and is much sought after.

We hope you’ve enjoyed our run down of the top 5 chillies in order of heat. If you can remember that Scotch Bonnet you tried and times the heat by about 10, you’re getting somewhere near the heat of one of the world’s hottest chillies! Do you think you could handle it?

If all this spicy talk has got you wanting to try some exceptionally hot chillis then be warned! Don’t choose water when you’re looking for something to cool the burning sensation. Milk is a much better choice. It contains a protein called casein that will help to break the bonds between the capsaicinoids and your pain receptors. Yoghurt works well too, and some people prefer the creamy texture. Another winning remedy to chilli heat is said to be white rice, often served up with spicy dishes and probably for good reason.

Now you’ve learned more about the spiciest chilis in the world you could enjoy a chilli adventure or steer well clear of the spicy stuff, the choice is yours!