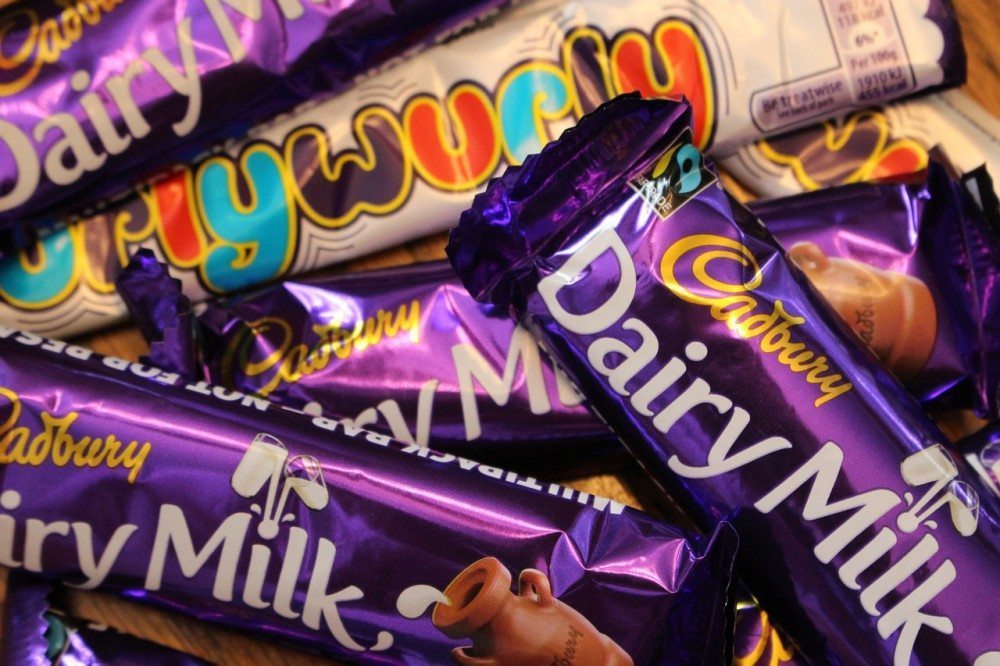 Have you ever felt like that chocolate bar you loved as a child seems smaller? Perhaps this question has caused discussion and speculation between friends and family, like whether or not chocolate should be kept in the fridge or not, or if Galaxy chocolate is nicer than Cadbury chocolate. Some say you were smaller as a child, the chocolate treat simply seemed bigger. Others are utterly convinced that their favourite chocolate treats have in fact shrunk. We polled 1000 people and found out that 79.8% of respondents in the UK think chocolate is getting smaller, whereas only 48.3% of US respondents thought the same, with many more US respondents believing it has stayed the same or even got bigger. So what is the truth behind the question? We set out to find the answer and finally settle the score.

It wasn’t an easy task. Oh how hungry we felt as we searched for the evidence to bring to you. All the memories of chocolate bars eaten and enjoyed. Images of chocolate bar wrappers floating past our eyes making our tummies rumble. But we were determined to uncover the truth! The results are rather interesting…

As you can see, many of your favourite chocolate bars have varied in size over the years. Take the Mars bar for example. Records track the standard Mars bar weighed 49g in the 1980s, 65g in the 1990s and dropped to 50g in 2009. This is quite a drop that you’re sure to have noticed if you’re having a mars a day to help you work, rest and play.  What’s more, in 2013 the Mars bar then grew slightly to the weight you’ll find today, 51g. If your memory of Mars Bars is from childhood in the 1990s, you’d actually now be eating something that’s significantly smaller than you remember. However since its introduction to the UK it has actually grown by 4%. 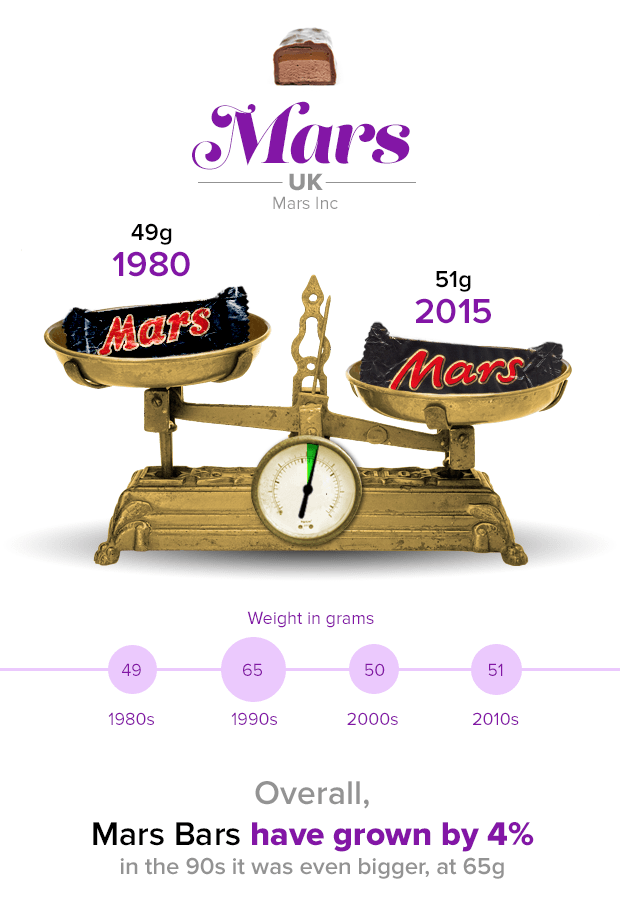 Are Yorkie Bars Smaller Than They Used To Be?

The worst culprit we found was the Yorkie bar, marketed as a chocolate bar so hefty ‘it’s not for girls’. The slogan itself may have caused controversy but so have its various shrinking incarnations. Our records found the original Yorkie bar weighed 58g back in the 1970s, and over time shrunk to 52g, before increasing to a whopping 70g in the 2000s before settling at its current weight of 46g. In total that’s a 20% decrease. You’d certainly notice the missing chunk if you were a regular Yorkie eater, as the once six-chunk bar now only has five chunks to enjoy. 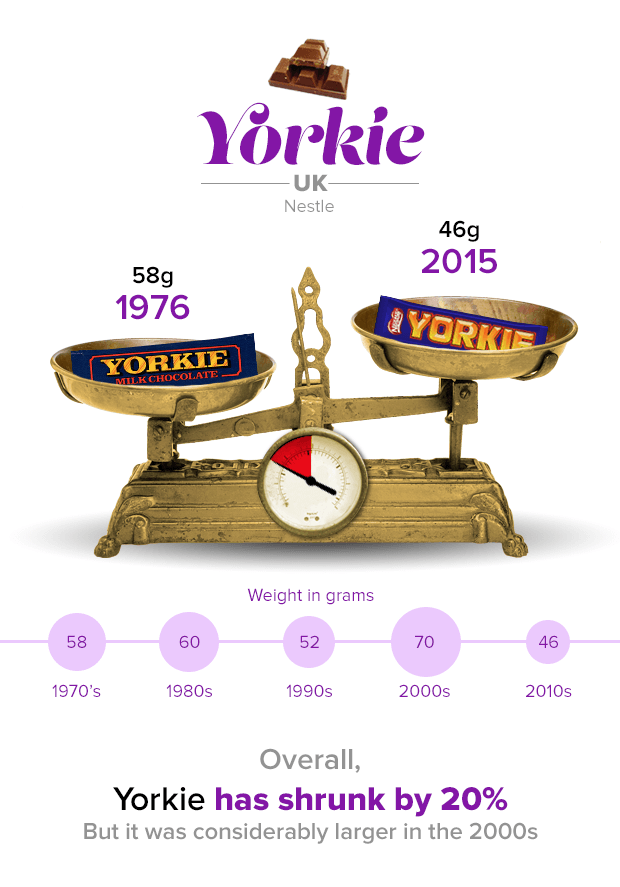 Are Wagon Wheels Smaller And How Big Did They Used To Be?

The shrinking Wagon Wheel question has long been discussed, and was in fact dismissed by this official statement from Burton’s biscuit company, who declared: “Contrary to popular belief, Wagon Wheels have not actually got smaller, most often our first Wagon Wheel experience is in childhood and hence our hands are much smaller.” We were determined to find out the truth where others have failed, and after much investigation we uncovered some findings that might make the Burton’s spokesperson blush.

Depending on your age (I’m not asking!) you might remember the Wagon Wheels of the 80s or before. Sometime during the 80s they saw their first reduction from a 79mm width to a 74mm width. Following this, they shrunk again sometime between their 2006 weight of 41g and today’s weight of 36g. Again this is no small change, a 12% decrease is something you’d be sure to notice. 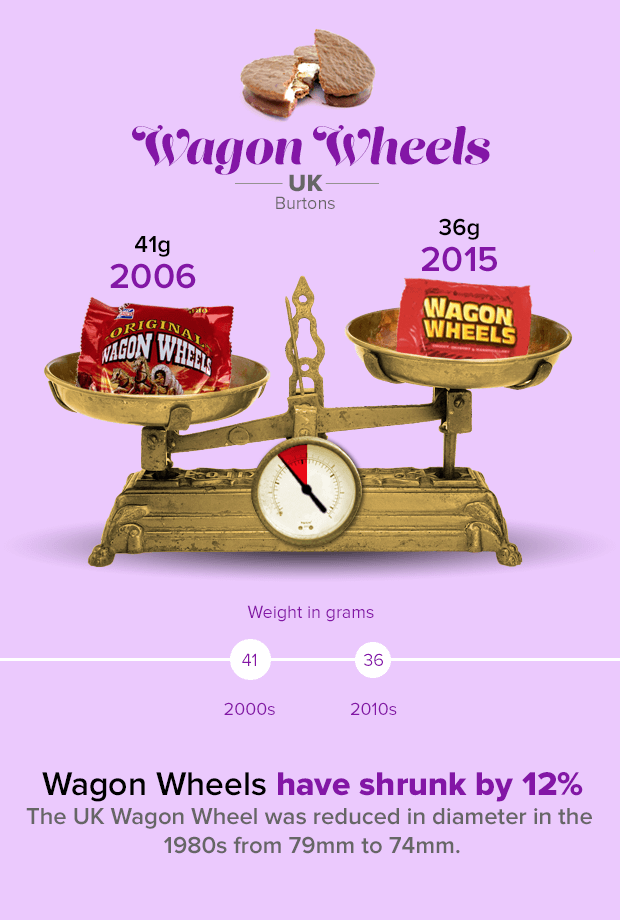 Across the board chocolate seems to have shrunk more in the UK than in the US. However, the change of chocolate sizes is an international phenomena as illustrated by some favourites from outside the UK. The Hershey’s Rally was initially 40g in the 1980s but increased to 63g in the 2000s and then shrunk to 47g in the 2010s, creating actual overall growth of 18% from its introduction. However, those who were used to eating the bigger bar of the 2000s will feel the decrease. The reduction in the standard Hershey’s bar caused some controversy but it’s actually one of the smallest changes we’ve found, shrinking from 46g in the 70s to 43g, then further decreasing to 42g more recently. It’s possibly the attempt to mislead consumers that has caused the most outrage in this case. The height and length of the bar are said to have remained the same so the overall appearance seemed the same. However the manufacturers created a thinner bar, which was sold at the same price. This current bar is still bigger than its original 60s incarnation which was just 35g.

Why Is Chocolate Changing In Size?

The amounts that your chocolate bars have changed vary significantly, and there are different explanations for why they might have shrunk and grown throughout the decades. Different manufacturers will have their own reasons or may be making these changes as a result of a variety of factors, so let’s take a look at what these might be.

1. The Global Demand For Chocolate

Chocolate has become more and more popular, and the global demand has increased significantly. Since 2008, demand is reported to have increased 80% and at the same time cocoa yields are reducing. Chocolate manufacturers may simply be trying to eke out the supplies they are able to get hold of, so they can keep selling volume of their products. The chocolate supply isn’t infinite.

Over recent years obesity has become more of a concern. It is impacting on public health and medical costs. Measures have been put in place to try to improve public health, and pressure has been put on businesses to help. Is our wellbeing as a race at the heart of the chocolate changes?

Perhaps the reason most often stated as the cause, but also the most cynical, it’s simply down to company profits. If the manufacturer can sell less of a product for the same price they will make more money on it. In the majority of cases the chocolate producers don’t seem to have reduced prices in line with chocolate shrinkages, so this may be a factor.

Whatever the reason, it has been investigated. Our chocolate bars are changing in size over time. Your own perception will probably be coloured by the size of the chocolate at the time you were growing up, and whether it has grown or shrunk since then. It’s not just nostalgia for the good old days that’s tinting our perception of our favourite treats. Some of our most popular bars have been significantly morphing over the years! Perhaps a smaller chocolate indulgence isn’t such a bad thing for our health? But savour every bite, there’s not always quite so much to enjoy as there used to be 😉