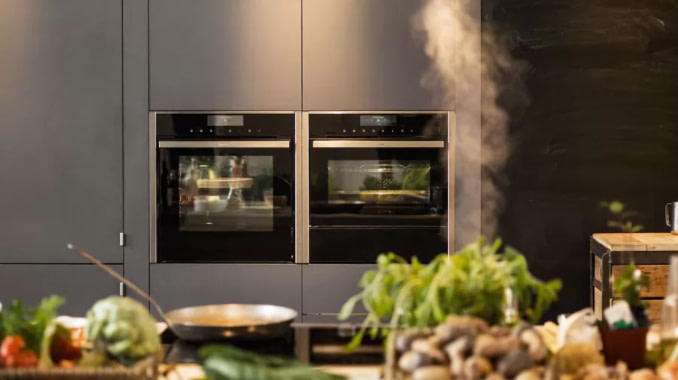 What is a steam oven and how does it work? What are the benefits of steam ovens, you might ask? In this short blog, we will explain everything you need to know about steam ovens.

When affordable steam ovens were released in the 1990s, they revolutionised the way that people cooked in their own homes. Steam ovens had long been available for professional chefs, offering them a time-efficient and healthy way to produce great tasting food.

How Does a Steam Oven Work?

Steam ovens contain a reservoir which holds water used in the cooking process. The oven heats up that water, turning it into steam. The steam rises and passes over the food, heating it up. At the top of the oven there is a valve which gradually lets air out to release pressure which builds up as the water turns to steam. Steam ovens can achieve incredibly high temperatures and cook food very quickly.

The History of the Steam Oven

There are many different kinds of steam oven. The earliest recorded evidence of people using steam to cook food can be traced back to ancient China, where chefs would place reed baskets over woks filled with hot water. In the 18th century, cooks in Vienna developed the steam deck oven, which they used to cook baguettes. Steam pressure cookers were not developed until the middle of the 20th century.

The Benefits of a Steam Oven

There are many benefits to using steam ovens. Firstly, food that is steamed usually tastes much better than food that is boiled. If you hate eating soggy vegetables, try steaming them. Steamed vegetables remain crisp and crunchy, and also retain their moisture, so they look and taste better.

In addition, steam cooking allows food to retain more nutrients. Both boiling and baking food reduces their nutritional value significantly. Steamed food contains more usable vitamin C, folic acid and antioxidants. You still lose some nutrients compared to eating the food raw, but the loss is significantly lower than that seen in other cooking methods.

Steam cooking requires no extra oils or fats, which means that it is a good choice for people who are watching their calorie intake. It’s also impossible to burn food in a steam oven. Many people use pressure cookers to slowly cook foods while they are out at work, ready for a nutritious meal once they get home.

Sadly, you can’t use a steam oven to give meats a golden brown look. You could, of course, put some steam cooked chicken on the grill for a couple of minutes to finish it off, if you really like the “flame grilled” look.

How Do They Work?

Most steam ovens are quite small and compact – between microwave sized and the size of a full stove. They come with a detachable reservoir for the water and do not need to be connected to a water supply.

Steam ovens are capable of reaching temperatures of between 212 degrees and as high as 570 degrees. They can be used for slow cooking and defrosting, or to rapidly cook meats and vegetables.

Smaller, microwave-sized steam ovens are a good choice for the average family kitchen. They can be mounted to the wall and used in combination with a normal microwave and a full sized traditional oven. Since they do not need to be plumbed into the water supply, you can install them anywhere that there is space. You can fit a 450mm sized steam oven and a combination microwave/grill oven into a typical double-oven cavity.

If you are a passionate cook, however, you may need a bigger steam oven. It is possible to steam several different foods at the same time, and there will be no flavour contamination. This means that you can simply place your vegetables, meat and pudding in the oven and forget about them until it’s time to serve the meal.