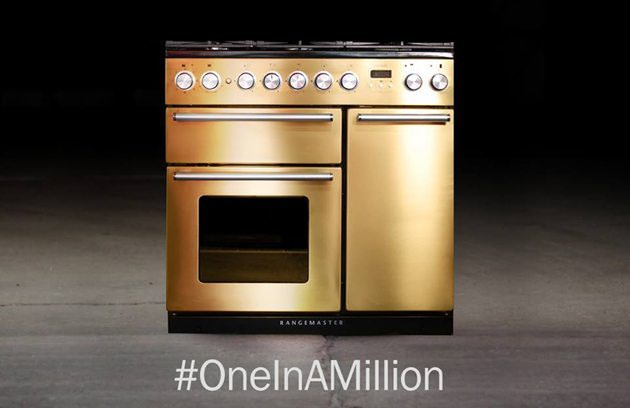 The 4th March 2015 may have been a standard Wednesday for some, but in Royal Leamington Spa, home of the Rangemaster factory, it was a very special day indeed! Rangemaster, premium manufacturer of range cookers since 1830, hit a huge milestone when it’s 1,000,000th range cooker rolled off it’s production line in all it’s golden glory!

That’s right, to mark this tremendous occasion, the one millionth range cooker made was a stunning Nexus 90 in gold! They also celebrated with a rather impressive full width Range Cooker cake!

To celebrate this terrific milestone, all the range cookers made on the 4th March 2015 had a little something extra put in them; a golden ticket! So, should you buy a new Rangemaster range cooker that was produced on 4th March, you’re in for a treat! Prizes include: a full refund of the price you paid for your cooker, hands on cooking experiences, extended warranties, Rangemaster cookware and in true Willy Wonka fashion, a tour of the Rangemaster factory!

Good luck to everyone! and if you were looking to purchase a new Rangemaster range cooker, what are you waiting for? Take a browse on our website and then call our friendly team who’ll be happy to help! 0115 965 1937

Are you a lucky winner? Firstly… CONGRATULATIONS! Secondly, head over to Rangemaster to claim your prize! Click Here > Rangemaster Million Prize Draw!